BRN facilitates the rehoming of dogs in one of two ways:

These are beagles who have come into care with us and are currently living with one of our amazing volunteer foster carers. We spend some time getting to know them before embarking on the search for their new homes. All our foster dogs are vet checked for general health and, if needed, brought up to date with vaccinations, flea/tick and heartworm medications. We’ll also ensure we carry out any vet work for specific ailments if needed. We will also ensure any dogs not already spayed or neutered are desexed before they leave our care.
Beagles in foster care are adopted via an application process. Applications are collected and assessed to try and match the individual dog to the applicant we think they are best suited to. This gives our beagles the greatest chance of success in their new home. All beagles in foster care are adopted on a 30-day trial basis – this gives the beagle and their new adoptive family an opportunity to really get to know each other. If at any point during the trial period, the family feels it’s not going to work out, they just need to let us know and arrange for the beagle to be returned to their foster carer. It’s ok if that happens, sometimes, things just don’t work out the way everyone hoped. We know that each dog’s perfect match is out there, and we are committed to finding them.

These are beagles who will stay in the care of their current owners until they find their new home. The current owners field enquiries from potential new families and make all decisions regarding their Beagle’s new home. BRN advertises these beagles to our many followers to help connect the beagle in need with those looking to add a beagle to their family. As these dogs are not in our care and we haven’t assessed them, BRN is entirely reliant on the information provided by the dog’s current owner. BRN’s policy is that any dog listed for rehoming must be desexed before listing, and must be registered in the name of the person requesting the rehoming. 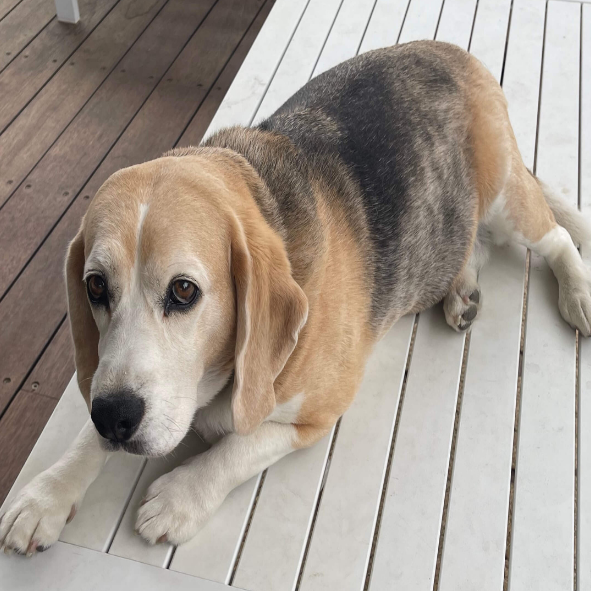 Originally obtained from: Navy family who couldn’t keep her as a puppy

Temperament: Marlee barks a lot. She also needs to separated from other dogs at meal times, as she can become pushy around food and try to steal from the other dog.

Marlee is a very dominant girl, she walks all over our other dog (who is very ill). She knows exactly when meal times are, and starts barking until she is fed. We put her food down first, but when we put the other dog’s food down, she’ll leave her bowl and try to snatch food out of his bowl.

Her barking is a problem, but I feel it might be our place, as she does not bark at the kennels they sometimes stay at. She barks at anyone walking past the house, driving past the house, the neighbours… anything. When she barks she then cowers away to the other end of the yard, so she will never attack or approach (she seems scared) but the barking is relentless.

Used to cats: No.

Other dogs: Marlee currently lives with another dog. The issues described above relate only to interactions where food is involved. Ideally, I’d like her to have company of another dog, but I think she’d be ok on her own too. She can be quite busy doing her own thing.

Training: We have tried a number of methods of training for Marlee, none of them have worked.

Reason for rehoming: We are looking to rehome her as she has been timid of people her entire life and we have people entering our yard everyday for work, excessive barking and most recently being very snappy of our male beagle (only around food) who has almost reached the end of his life. In regards to the excessive barking, we are actually afraid our neighbours will take things into their own hands hence why we have made this extremely hard decision.

About Marlee: Marlee can be very playful and fun. She would be suited to a home with a large yard, she loves to run. We are unable to walk her as she pulls and screams until she vomits.

Please contact SABINA who is Marlee’s owner on sabinahobbs@hotmail.com or on 0423 460 619. Marlee will remain in her home until Sabina has made a decision about her new family.

Please note that as a private rehoming, we know only what Marlee’s owner has told us. She is not in care with Beagle Rescue NSW and we have not assessed her. Marlee’s owner will field all enquiries and make all decisions regarding her new home. Once Marlee’s new home is chosen, her current and new owners will need to complete and sign a Form C3A together, then lodge the completed form with council (no cost) to transfer her ownership details.

Welcoming a new member of the family is an exciting time for everyone. Please remember though, that for the dogs, it can also be a scary and anxious time. They leave behind everything they’ve known so far to go to a new place with strange people, strange dogs, strange sights and smells. It may take them a little while to settle in.

While each dog is an individual, generally try to remember the ‘Rule of 3’ when welcoming a new dog into your home:

Give your new dog space and time to work at their own pace during this initial settling in period.

Please sign up for beagle news, details of any events, and to be the first to hear about cute new beagle merchandise

Any cookies that may not be particularly necessary for the website to function and is used specifically to collect user personal data via analytics, ads, other embedded contents are termed as non-necessary cookies. It is mandatory to procure user consent prior to running these cookies on your website.